As a Catholic, I believe in Christ and His Church on their own merits. Perhaps learning of miracles will help others to come to investigate the Church more closely and learn of the fullness of truth…

Eucharistic Miracles: Scientific Proof that Eucharist is the Body of Christ

Between flesh and bread: The autopsy of a Eucharistic miracle 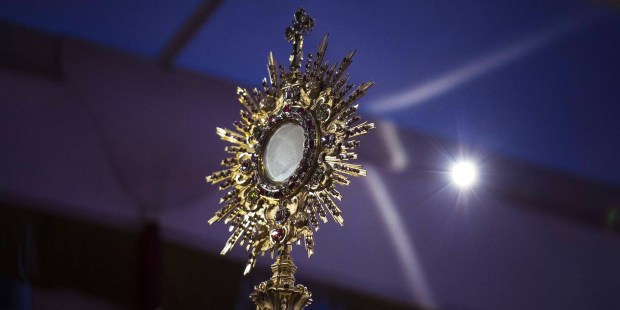 This short video recounts the story of the amazing Eucharistic Miracle that happened in Argentina in 1996 in the Parish of St. Mary. For many Christians, Holy Communion is a symbolic ritual, but Catholics believe it is in fact His divine body and blood. This sounds absolutely nuts, but it’s a matter of faith.

… And of scientific evidence…

The Eucharistic Miracle of Lanciano

This wondrous Event took place in the 8th century A.D. in the little Church of St. Legontian in Lanciano, Italy, as a divine response to a Basilian monk’s doubt about Jesus’ Real Presence in the Eucharist.

During Holy Mass, after the two-fold consecration, the host was changed into Heart Tissue Flesh and the Wine was changed into Actual Blood, which coagulated into five globules, irregular and differing in shape and size.

(For the scientific tests on the Eucharistic Miracle of Buenos Aires, go to the 12:00 minute point.)

The Eucharistic miracle of Sokolka: The host is tissue from heart of a dying man

Click on the photo to go to the article at Aleteia…

The Eucharistic Miracle of Santarem

The story of the Eucharistic Miracle which took place in Santarem around 1247 and is still visible today.

Miracle of the Eucharist Host of Betania

Miracle captured on video by Daniel Sanford of New Jersey. On 11/13/98, as part of the pilgrimage, he went to see the Bleeding Host of Betania at the Chapel of the Augustinian Nuns in Los Teques. The Spiritual Director, Father Mazzarella, said Daily Mass. When they finished, he opened the Tabernacle door, which contained the Bleeding Host. The Host was in flames, bleeding, and there was a pulsating heart bleeding in the center of the Host. Daniel watched this for about 30 seconds or so, then the Host returned to normal. HOWEVER, He did manage to film this miracle with his camcorder!

This video is a summarized explanation of several (but not all) key aspects of the Tixtla Eucharistic miracle that is included in THE REAL PRESENCE PROJECT that can be found on our FamilyPrayerNight.org website.

Chemist and Theologian Dr. Stacy Trasancos, and Interventional Cardiologist Dr. Oscar Paniagua discuss some of the most incredible miracles in the history of the Church: Eucharistic miracles.

Catherine Latapie was the first person to be miraculously cured at Lourdes. She was healed of paralysis in 1858. And on the same day she was cured, she gave birth to a boy who later became a priest. Her spectacular cure was a test case that started an era of reported miracles thats lasted ever since. These claims have increased over the years, and led to the setting up of a Medical Bureau at the Marian shrine in 1905. The office studies cases of those who claim to have been miraculously cured.

The Miracle Cure of Delizia Cirolli at Lourdes – The Extraordinary. Wikipedia: “Delizia Cirolli, later Delizia Costa visited Lourdes on 24 December 1976. Age 12, from Paterno, Sicily. Ewing’s sarcoma of right knee. Offered amputation by her doctors, her mother refused and took her to Lourdes instead. On returning to Italy, her tumour regressed until no remaining evidence existed, although it left her tibia angulated, which required an operation (osteotomy) to correct. Her cure was recognised on 28 June 1989. She went on to become a nurse.”

There have been thousands of miraculous cures at the grotto of Massabielle, near Lourdes, France, where Blessed Virgin Mary appeared 18 times to Bernadette Soubirous, a 14 year old peasant girl In 1858 . The Blessed Virgin Mary identified herself as The Immaculate Conception. A Medical Bureau was established in 1882 to test the authenticity of the cures. This beautiful grotto receives more than a million pilgrims each year.

Danila Castelli, born on 16 january 1946, wife and family mother, has lived a more or less normal life until the age of 34 when she started having spontaneous and severe blood pressure hypertensive crisis. In 1982 some Rx and ultrasound tests detect a right para-uterine mass and a fibromatous uterus. Danila is operated for hysterectomy and annexectomy. In november 1982 she undergoes partial pancreatectomy. A scintigraphy the following year proves the existence of «pheochromocytoma » (a tumor that secretes high amounts of catecholamines) in the rectal, bladder and vaginal region. More surgical interventions follow in the attempt to stop the triggers to the crisis until 1988 but with no bettering at all. In may 1989, during a pilgrimage to Lourdes, Danila gets out of the Baths where she had been immerged and she feels an extraordinary feeling of wellbeing. Shortly after she reported to the Lourdes Office of Medical Observations (Bureau des Constatations Médicales de Lourdes) her instantaneous alleged cure. After five meetings (1989, 1992, 1994, 1997 and 2010) the Bureau certified the cure with an unanimous vote : « Mrs Castelli was cured, in a complete and lasting way, from the date of her pilgrimage to Lourdes — 21 years ago — of the syndrome she had suffered and with no relation with the treatments and the surgeries she received ». Danila Castelli has since gone back to an absolute normal life. The CMIL (Lourdes International Medical Committee) in it’s annual meeting of 19 november 2011 in Paris has certified that the cure « remains unexplained according to current scientific knowledge ». On June 20th 2013 Monsignor Giovanni Giudici, Bishop of Pavia, the diocesis where Danila Castelli lives, has declared the « prodigious-miraculous » character and the value of « sign » of this cure. It is the 69th cure of Lourdes recognized as miraculous by a Bishop.

What are the criteria are used by the Church to recognize authentic miracles?

Click on this link for more information on Miracles:

THE REAL PRESENCE OF CHRIST IN THE EUCHARIST

Not even science can explain the spectacular scene 70,000 people witnessed in Fatima, Portugal on October 13, 1917.

Fatima Miracle Of The Sun

“Everyone within an area of 32 miles thought it was the end of the world.”

Sermon on the Miracle of the Sun. What happened? Why is it significant? What does it symbolize? Who wrote about it & took the pictures? What evidence is there about it? Is it historical? What does the message mean? For more go to http://www.romans10seventeen.org & remember to say 3 Hail Marys for the priest

THE HEALING OF GEMMA DI GIORGI

Gemma di Giorgi was born on Christmas day in 1939, in the Sicilian town of Ribera. Almost immediately, her mother realized that her eyes were different from other children’s eyes. The truth was, Gemma was blind. Her mother took her to a doctor who was unable to determine the gravity of her condition. She was referred to two specialists in Palermo. They determined that Gemma had no pupils in her eyes; that nothing could be done for her blindness; that her condition was inoperable. Gemma’s family was desperate, but there was nothing they could do. Her parents often took her to Mary’s altar in the church to pray because they felt it would take a miracle to heal her eyes.

Click here to read the rest of the story…

Miracles are one part of the Catholic Faith that makes it hard for even the staunchest skeptic to refute the Divine nature of the Church. From bread turning into bleeding heart tissue, to the sun dancing in the sky in front of 100,000 people, some miracles simply cannot be explained by science. On this episode of the Catholic Talk Show, the guys discuss 5 Catholic miracles that confound science.

Our Lady Of Guadalupe Tilma

The Tilma was examined under a laser ray, it was shown that there is no color on the front or the back of the cloth, the colors hover at a distanceof 3/10th of a millimeter over the cloth, without touching it. The colors actually float above the surface of the Tilma.

In this presentation, Robert Haddad outlines many miracles that have occurred in the past, including in very recent times, which verify specific teachings of the Catholic faith. These include Eucharistic miracles, miracles relating to the apparitions of Lourdes and Fatima, miraculous images, incorrupt bodies, stigmata, etc. All these miracles have been verified by science, medicine, or both. This is an exciting must-see presentation that simultaneously challenges sceptics, modern Catholics and non-Catholics.

My FAVORITE video I’ve ever made!!! This was THE SCARIEST part of Catholicism to me as I was converting in: the apparent OBSESSION with dead body parts. It was disgusting, creepy and seemed satanic. Now 1 year into being Catholic, I’ve dived in and discovered the immense, incredible BEAUTY in collecting, honoring and experiencing miracles through Relics of Holy people in Heaven!! GOD chooses to honor the Saints in this way and we should too!

Click here for more on Our Lady of Guadalupe…

And click here to go to the Shroud of Turin…